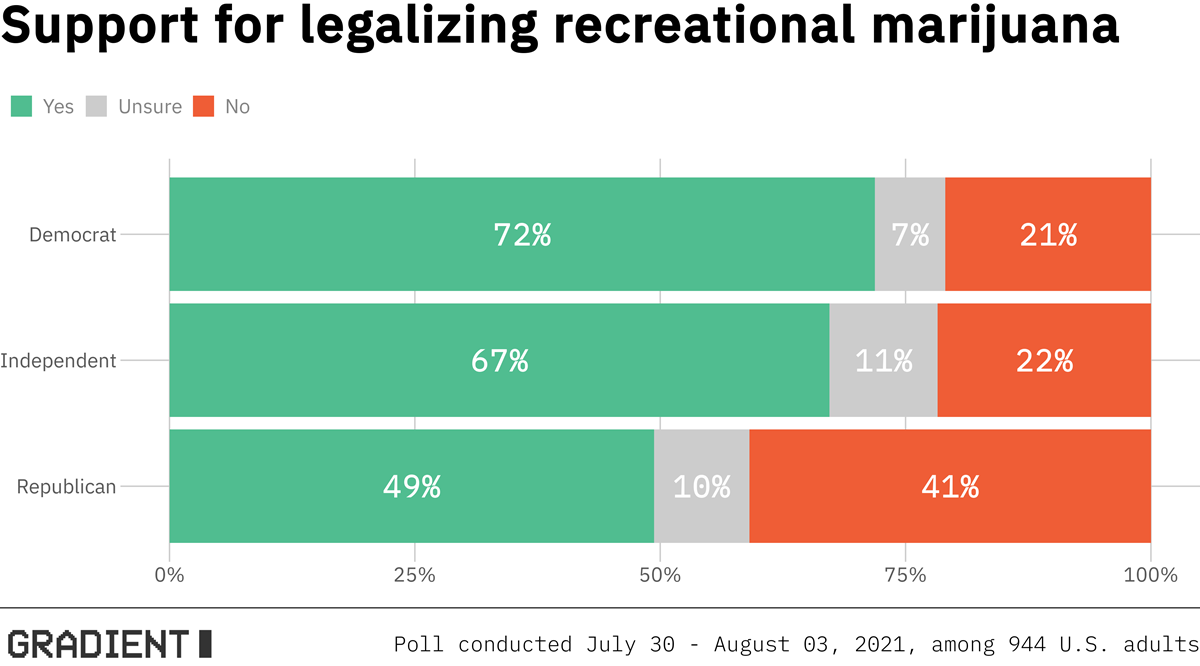 Back in February, we took a blunt look at Americans’ views of the health and societal benefits of marijuana. This time around, we’re zooming in on the politics of legalization.

Americans are ready for Congress to pass some laws so they can pass some joints, as 64% support legalizing recreational marijuana at the federal level. Of course, there are some holdouts – 27% oppose legalization (are they cops? They have to tell us if they’re cops).

You may not be surprised to learn that the parties differ on whether they want weed at their parties. While 71% of Democrats support federal legalization, only 49% of Republicans are in favor, though that still constitutes a plurality of Republicans.

The most frequently endorsed reasons for legalizing marijuana are the potential health benefits (64%), tax revenue (60%), and a reduction of the non-violent prisoner population (59%). Those who are not in favor of legalization fear it would lead to more usage among teens (56%), increases in traffic deaths (53%), and act as a gateway to more harmful drugs (58%).

Marijuana legalization is seen as a matter of life or death — the question is whether Americans think marijuana usage prevents or causes death.

Despite the large majority in favor of bringing the grasses to the masses, Congress is still harshing voters’ mellow. Why? The blame is mostly divided between lobbyists for big pharma (28%) and politicians not listening to their constituents (24%).

Of course, the staunchest pro-weed advocates may be difficult to politically mobilize for some rea….is anybody else hungry?