Cue Miley because 2020 came in like a wrecking ball. In the midst of global health and economic crises, America is finally having a reckoning with its oldest, self-inflicted pandemic: racism.

As a rallying cry of the Black Lives Matter protests, “defund the police” has emerged as part of the solution to address institutionalized racism. But like most issues in this country, not everyone has done their homework about what it actually means. To better understand Americans’ views, half of our survey respondents saw an explanation of defunding and half did not.

Explanation of Defunding the Police

“Defund the police” is a slogan that describes support for a reallocation of funds from police departments to non-policing forms of public safety and community support that are equipped to address emergencies that do not require weapons or force. Advocates argue that investing in community programs provide better crime deterrents by addressing social issues like poverty, homelessness, and mental disorders. “Defund the police” is not a call to abolish police departments.

Without any explanation of what defunding entails, 44% of Americans support the concept. Among the half who were given an explanation, support for defunding the police increased to 56%. 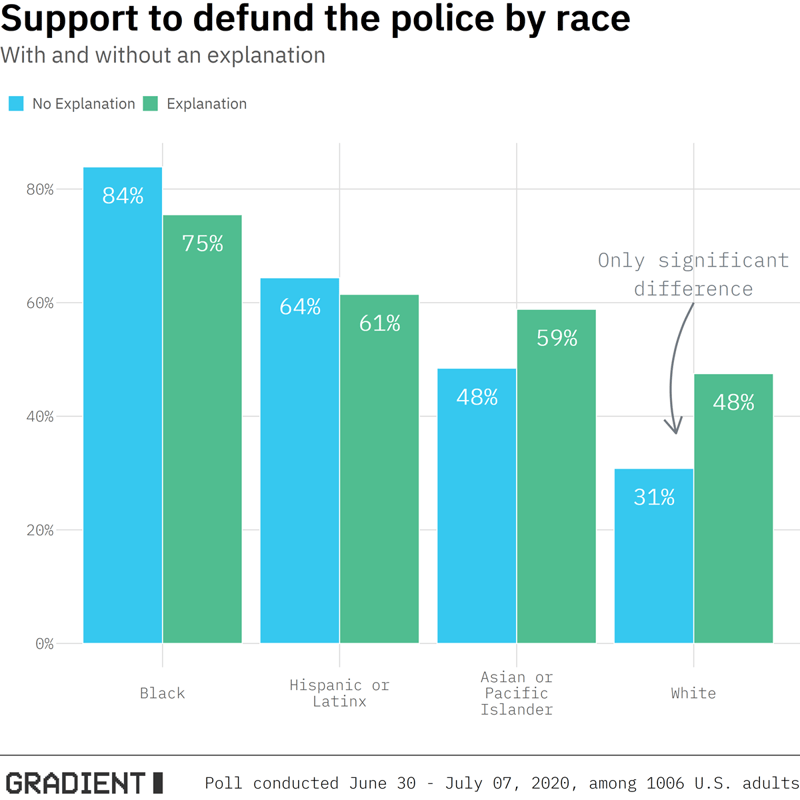 There is overwhelming support among Black Americans to defund police, regardless of whether or not they saw an explanation. The explanation made no statistical difference among Latinx, Asian, or mixed race people.

However, among White Americans, seeing the details increased support by 17% — or perhaps made the idea less unpalatable. More than half of White people (52%) were quick to express their strong disagreement (read: outrage) at the idea of defunding police, but when given an explanation, those who “strongly disagreed” dropped to 38%.

Any teachers out there willing to share their Zoom passwords? It sounds like some people could use a little education.