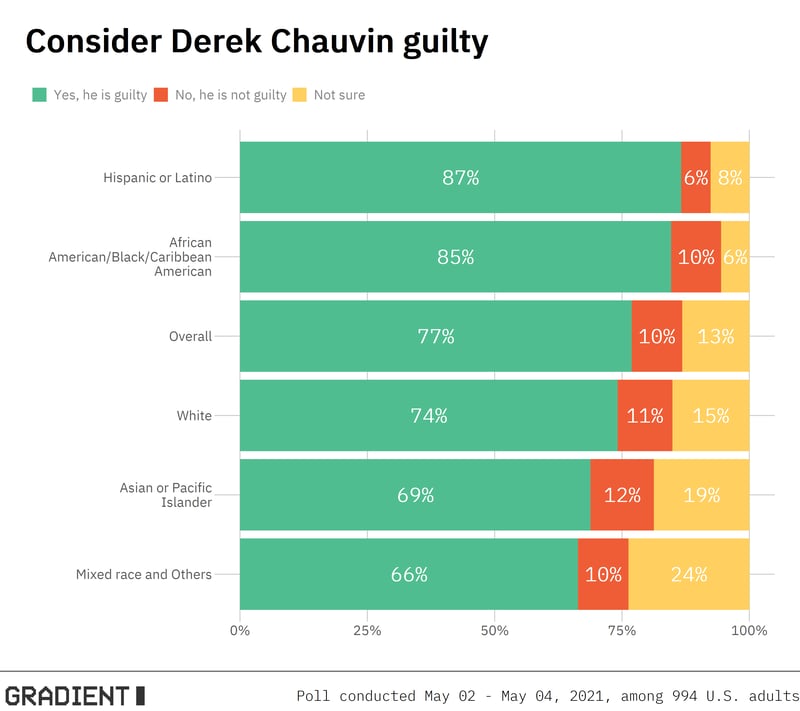 Nobody should be faulted for feeling overwhelmed by the 2020 -> 2021 news cycle. An obscure virus turning into a global pandemic. The world seemingly ending. Wildfires everywhere. The murder of George Floyd and the worldwide movement it spawned. The Election, then The Insurrection. The Rupture of the Royal Family. All of these are attention grabbers.

But the trial of Derek Chauvin cut through it all. A mere 7% of Americans recall knowing nothing at all about the trial. If we all still listened to radios like wholesome 1940s families, this would be the equivalent of nearly every household gathering around each evening to hear the latest from the frontlines (like the actual frontlines of the war, not of a pandemic).

In a rare display of unity, 77% of Americans consider Derek Chauvin guilty — including 53% of Republicans — while 10% consider him innocent. Hispanic/Latino and Black Americans are even more likely than average to view Chauvin as guilty (87% and 85%, respectively). In an era where everyone seemingly has an opinion on everything, just 13% of Americans don’t have one. 🦗

Along with the broad perception of guilt, one-third of Americans think Chauvin deserves the maximum 75 year sentence and two-thirds think he should be sentenced to at least 20 years in prison.