Americans Hate the Label of “Democratic Socialism.” The Concept, Not So Much. 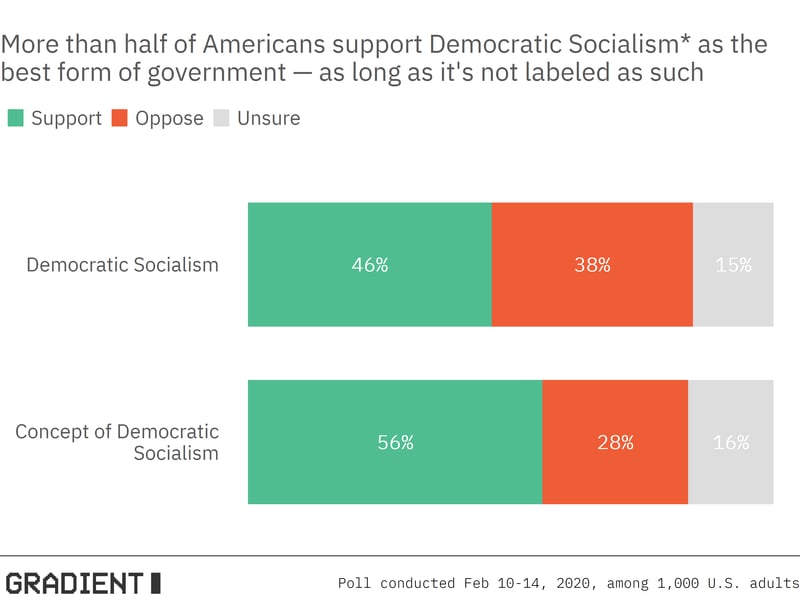 *A Democratic Socialist form of government is designed to meet the needs of the general public through a democratically elected government and socially-owned economy. In this form of government, the workers and consumers who are affected by economic institutions own and control them rather than being concentrated among a small number of private owners.

Americans are supposed to have a strong aversion to anything “socialist.” It’s the only difference between us and Europe, right? But... how do we square this with self-described Democratic Socialists like  Bernie Sanders and Alexandria Ocasio-Cortez leading a wave of energy in the Democratic Party?

To resolve this puzzle, we asked Americans whether or not this form of socialism — where workers and consumers own and control the means of production — is the best form of government. Half saw the words Democratic Socialism in the definition; half did not.

The branding effect is especially pronounced among Republicans. With the “Democratic Socialism” label, 27% agree. Without it 51% agree.

With 73% of Americans thinking the government should mandate a minimum, livable wage, and two-thirds holding the opinion that wealthy people should be taxed at higher rates, it’s clear that many Americans want the government to play a larger role in the economy.

Want the data? Want to know more about our methodology? Reach out to us through our contact form below or shoot over an email at team@gradientmetrics.com