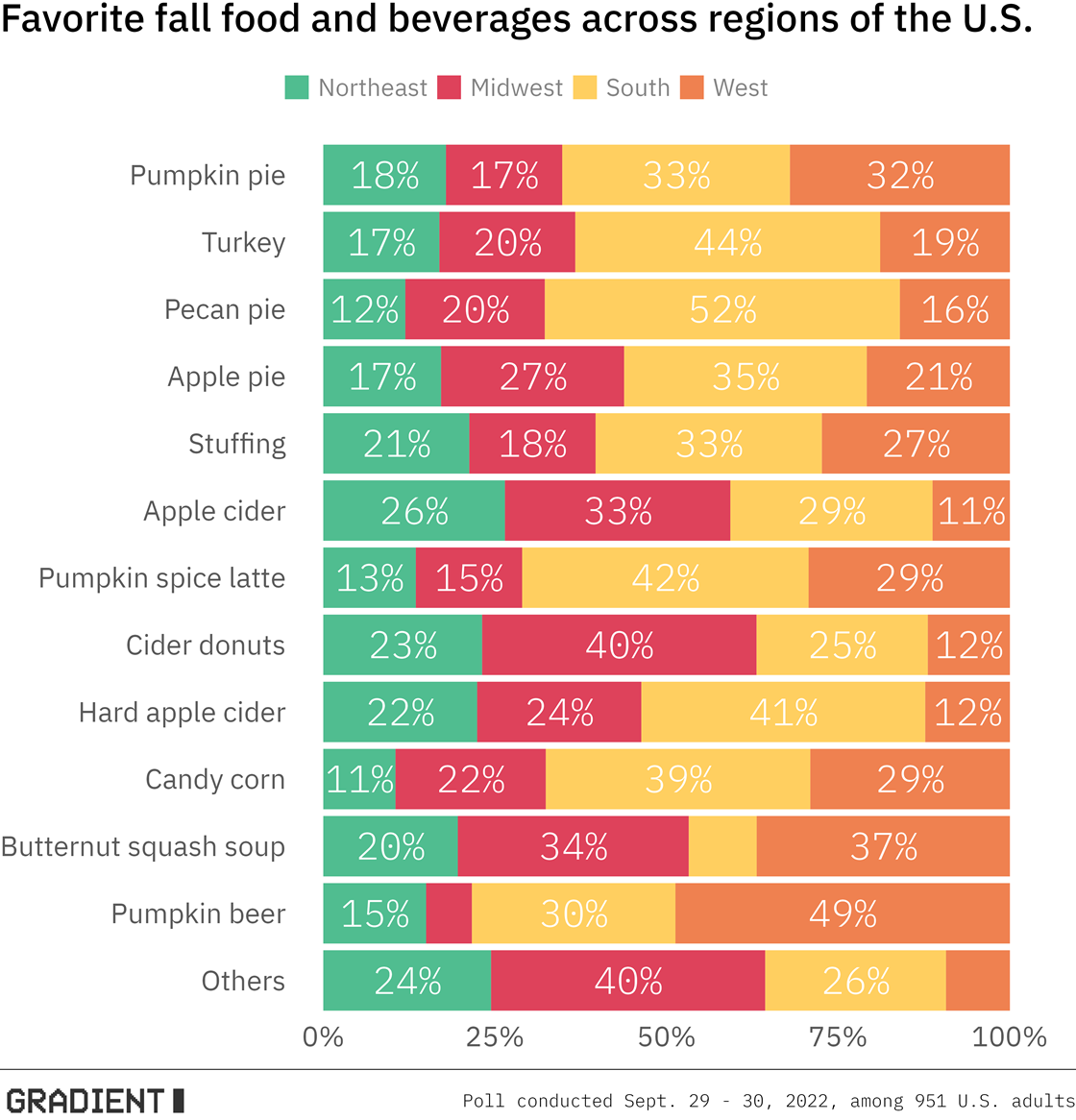 Fall is such a wonderful time of year, the typical Trendlines story intro will not do. No, fall deserves a song parody set to the tune of "My Favorite Things" from The Sound of Music:

🎶🎶🎶
Pumpkin spice everything, not just the coffee
Pies served with whipped cream and maybe a toffee
Scary ghouls and monsters, playing with my heart strings
These are a few of my favorite things

Sporting a plaid shirt beneath lots of layers
Watching football and basketball, seeing the players.
Eating gravy and turkey, giblets and wings
These are a few of my favorite things
🎶🎶🎶

Now that we have shared a few of our favorite things, what has Americans falling for fall?

First of fall, a plurality of Americans (44%) agree that fall is the best season. The rest are wrong. Strangely, Northeasterners are the least likely (38%) to choose fall as their favorite season—apparently, if you’ve seen one hectare of maple trees transition from emerald green to a golden yellow, you’ve seen them all. Southerners are the most excited about the season with 46% choosing it as their favorite season. Even if it only lasts about two weeks for them. #falsefall.

Americans’ favorite fall activities include enjoying nature (25%), celebrating Thanksgiving (19%), and watching sports (13%). Unsurprisingly, those living in the West are significantly less likely to enjoy fall nature (19%) compared to other regions. While coastal Westerners don’t get to experience the changes in leaf colors as much as others, they do get a reprieve from the summer heat, making wearing warm clothing their fourth favorite activity.

With all regions of the U.S. embracing the season, we should expect at least one politician to run on a “Fall 365” platform during the midterm elections. Now that is climate change we can get behind. Handing out pumpkin pies to voters would be a smart tactic given a plurality of Americans chose it as their favorite food (18%). However, if you want to win the South, it may be best to pass out turkey legs, as the succulent bird is the top treat for most Southerners (24%). As they say in the South, you can’t skin a pie!